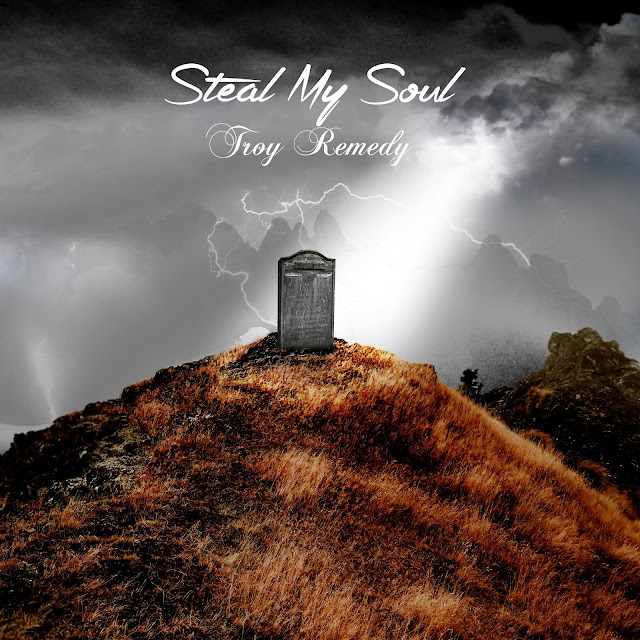 Don’t judge a book by its cover. I learn this old lesson the hard way thanks to the artwork for Texas-native Troy Remedy’s new hip-hop single (image included left.)  Too many tombstones on the covers of too many rap albums, reflecting a culture in which so many young people live such short, violent lives. Naturally I’m expecting to hear a rapper who’s blindly furious at losing so many friends and family, his rhymes not being sung as much as “spit out” in a rage-filled growl.

Instead we get the beautiful voice of an uncredited female vocalist, singing, “What they just don’t know is that you could never steal my soul…” Her voice is incredible. Smooth. The beat is hard but also slow and easy. When Remedy begins rapping, it hits like cold water. The wisdom in Remedy's words has come with a price. Though his rhymes are abstract, their images scattered, they flow perfectly with the mournful sax playing behind it:

“Poetic justice when it’s lifeline, the clutches. Those you wish grab your powers and scales, try to crush them. Patience, anxious the virtue, but the tactics stay alive but at that same time, aiming for that ladder you climb. Let us see you down a few rungs, down a few bucks, shit out of luck…”

The song is about how lives are ruined by drugs and the people who profit from them. It’s the agony of seeing the same disease happen over and over again to the people you care most about.

“Too many times seen the destruction of innocent lives, powerful minds left without that will to survive. Was baptized by that rage inside.”

Not bad wordsmanship. At all. And maybe that’s why the song feels even sadder. Sucks that such great songwriting must be used for something this tragic. (Alas, art is dangerous.)

“Steal My Soul” fades with the female voice repeating the title, backing up Remedy’s affirmation that the destruction and despair will never touch him. Never reach him. It is indeed the best way to survive.