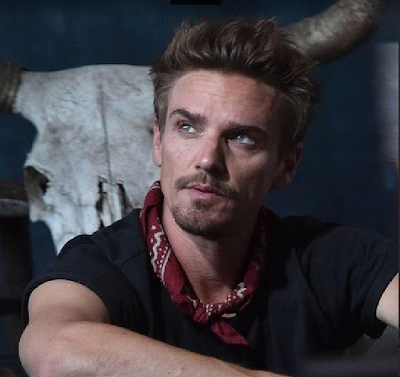 Riley Smith is an actor who has played an oncologist in the TV series Life Sentence, a vampire in the final season of True Blood, and Sheriff's deputy Steve Mercier (Rachel McAdam's boyfriend) for HBO's True Detective.

However, the role which perhaps came closest to Smith playing himself was the one in which he played a singer/musician for the ABC show Nashville. He was able to combine his love for both music and acting, recording the singles "In the Name of Your Love" and "I Want To (Do Everything For You" for the show’s soundtrack. The music video for his first ever single “I'm on Fire” made it to number one on CMT's Taste of Country Countdown. Smith has now placed a total of six original songs in television and film, demonstrating that he’s not just another actor trying their hand at music because, well, ego.

Smith is for real and has even released a new single called “Earthquake,” co-written with Brad Irby and Kevin Leach who also produced the track. Grammy-winning Nathan Dantzler was hired to master.

The song begins with a slow slide-twang which sounds almost Hawaiian. “Baby, look at you,” Smith sings in a deep, smoky drawl, ”with that angel face / Been holding down this place…”

The song concerns the yearning one feels for another after being away from that person for far too long, and the joy released when meeting that person finally once again. The “earthquake” referred to in the chorus describes the subsequent lovemaking, which happens after such a long separation, the quick, ground-moving seduction of the already attained.

“Heart pounding in my chest,” he sings, “Breathe it in like a cigarette / It’s been four long weeks since I’ve been home / And now that I got you, ain’t letting go / Now we’re all tied up with the lights down low…”

Then: “This bed is an earthquake, baby / Hold on, hold on…” The sexual aggression implied could be a little off-putting for some, but it’s not the kind of song meant to be analyzed for anything deeper than just good sex. And a good time. Or a simple, catchy song if that’s all you’re looking for.

Smith’s music manages to demonstrate that he is more than a handsome face, framed by a dimpled chin, hard-stubbled jaw, and perfect James Dean hair, like swirls in a scoop of ice cream. It’s okay to take Rile Smith seriously as a musician. When it comes to his music, really, he’s not acting...