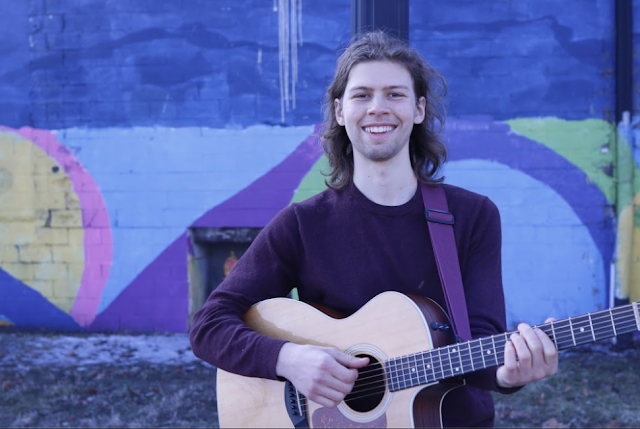 Michael Bruner is a shaggy-haired, baby-faced American musician , songwriter, producer, and visual artist who lives in Bloomington, Indiana. He looks like the guy who steals your girlfriend, but he’s so fucking cool you actually find yourself high-fiving him over it. Bruner’s been running a successful home recording studio called “Music Box Studios” since age 19. “Don’t Mean Broken” will be Bruner’s debut single.

What’s initially fascinating about this song is how it even came together, something which could only be done so easily nowadays, thanks to modern tech. While sessions took place in Bruner’s own studio and at Instru Dash Mental studios in Frankfort, Indiana, the bass was recorded by Marco Messina and drums provided by Luis Ravizza, both at separate studios in Montevideo, Uruguay. The song got made in the clouds over two continents. Bruner's brother Gabe played keys.

The song starts with an acoustic guitar, played quick but quiet. “I see them moving in and out,” Bruner sings, his voice crystal-clear, higher-ranged and pure. "And every time they wear you down..."

The bass and drums join in, counterpointing in an offbeat downbeat, sounding very smooth and almost reggae.

"Well, maybe there's an art to stepping through the darkness," Bruner sings. "Maybe it's the only way you will ever notice..." The song is about noticing when a friend is a caught up in a toxic relationship and can’t find their way out. Or don’t even realize they’re lost to begin with. Sometimes it takes writing a song about these people to get them to wake up…hopefully.

Bruner’s own comments on the single confirm this: "When I lost contact with a dear friend, I wrote this song as a message to her in the hope that she would find strength from within. ‘Don't Mean Broken’ speaks to those who may lose direction in the co-dependence of others.” Often, it’s a frustrating exercise. Thankless even.

The song’s bridge contains what sounds like a female voice humming but turns out to be a string instrument instead. Or a keyboard sounding like a string instrument. Or a female voice sounding like a keyboard. It goes great with the rhythm as does the jazzy guitar section afterwards. The sad whimsiness fits with the helplessness of the person Bruner sings about. Thankfully, music heals.

“Alone don’t mean broken. / You got too much going / To belong to someone else…” It’s a catchy chorus and easily hummable. (I’ll definitely admit to giving it the ol’ shower time acoustics check.) Between lines, there’s even a self-satisfied chuckle from Bruner. He knows what he’s singing is true. Every dude has been there.