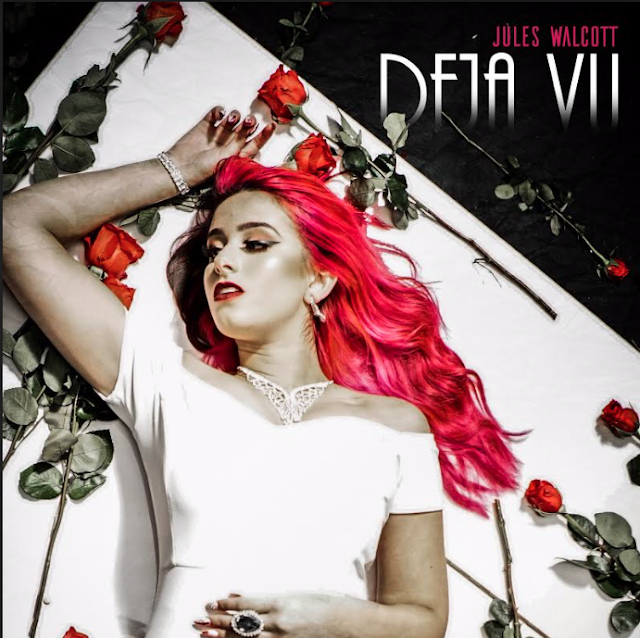 Born in New York, singer-songwriter Jules Walcott has experimented with just about every musical genre imaginable, even opera, even classical music. She once fronted a Long Island-based hard rock outfit. Considering this, it’s no wonder that Walcott’s newest single, “Déjà Vu,” is hard to pin down. She calls it “dark alternative pop.” We’ll go with that.

The song begins with a pounding piano line backed by soft strings. A warbled electronic voice struggles to be heard. That’s when Walcott’s voice comes in: “I was happy by myself,” she sings. “Single in my life. / You looked at me and told me that / You were single just the same…”

It’s easy to see where this is going.

“I can’t believe I fell in love / To be single again.” Walcott’s voice sounds wounded but never weepy. This is where the déjà vu comes in. The song is about the futility felt when trying to find your soulmate. Just when you think you’ve left the single life behind you for good—poof!—here it is again. Welcome back. Thought you were going somewhere?

The problem, of course, is that men are shit. The male subject of the song has deceived her. “Why didn’t you tell me that you had bad intentions? / While I was planning for us, you were making the next plan…”

In the end, however, it’s always for the best. “Your time’s up, time’s up / And now I’ve made my mind up.” She is obviously going to be better off as most women are when shedding losers who lie. It’s just never easy or fun getting blindsided.

“Déjà Vu” is a song for female empowerment, which somehow manages to avoid self-pity or soap box sermonizing. The track also remembers to be melodic and memorable while remaining somewhat stripped down, making each contributing part of the song all the stronger. Apart from Walcott’s robust voice is a punctuating bass and “take THAT” finger-snaps.

It’s a song about a woman anguished and shaken, but undeniably capable of recovery. Love just sucks. Thank goodness. After all, it’s where some of the best music comes from…

December 28, 2019
Ethos is the stage name for Alex Hlavna, a 19-year veteran of the Cleveland, Ohio music scene where he played guitar , bass, and drums on numerous recordings. He has now released his own song entitled “V: Parents” from his new album Ten Commandments. The V is the Roman numeral for 5, as in the 5th Commandment: “Honor thy father and thy mother.”  Each track on the album is titled this way, named after a commandment. Is this some type of “religious rap” or is Ethos being metaphoric? The actual definition of “ethos” is “the characteristic spirit of a culture, era, or community as manifested in its beliefs and aspirations.” Judging from such a moniker and from statements he’s made in interviews, it seems his goal is more about making observations, rather than instructing us that “thou shalt not whatever.” It’s a more provocative approach. The song is a funk-bassline over an electronic beat and soft synths. Meanwhile Ethos ’ voice is anything but soft as he raps about honoring your
Post a Comment
Read more

March 28, 2020
By Michael Bruner Getting tendinitis was surely a setback, but it also proved to be a positive constraint, an evolution in my approach to music. Instead of contorting my hand into a tense, fleshy spider, I did what felt best: Forcing my head and body to meet halfway. I kept writing. I finished the song “Midst of a Mistake,” inspired by a thieving taxi driver in China. I wanted to start producing this song, but I knew the audio production and editing would prove too strenuous to pull off single-handedly.  Just a few weeks after returning from China, I received a message from Rodrigo Cotelo. I’d met him at the first installment of a house show I performed at (shortly after the onset of my tendinitis). He accompanied a handful of talented Jacob’s students who had backed me up on a set of my original songs. I knew Rod and I would click with each other from the moment I found him sitting at a table, pouring a gourd of yerba maté. Rod’s lively spirit, carefree attitude, and co
Post a Comment
Read more