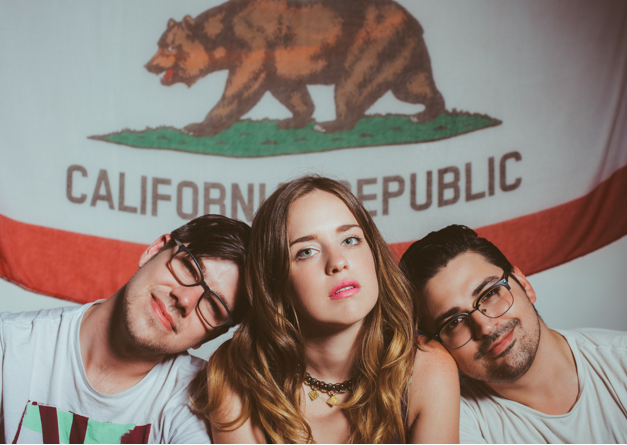 The Astronots (a child’s misspelling of “astronaut?”) was founded by Niko Giaimo on guitar and Allee Futterer playing bass. Their new single, “Settle Down,” is from their forthcoming release “Cotati,” named after the smallest incorporated community in Sonoma County, California, right above San Francisco. (Thank you,Wikipedia.) Giaimo helped score the soundtracks for Dexter and Dishonored II while Futterer is a seasoned bassist from the LA music scene. The two musicians grew up together in California before deciding to form a band. Their duo has now become a trio with the addition of guitarist Eddie Campbell (no, not that Eddie Campbell, though that would be crazy.)

“Settle Down” is a groovy, alt-rock song carried by Futterer’s thumping bassline and punctuated  with scattered but strong electric guitar chords, fitting in nice finger work between stanzas. The song’s bridge is underscored by an indecipherable radio broadcast voice and impressive change-up drumming from…someone. It’s a heavy song and that's good.

“You get me high all the time / You make me high all the time,” Futterer sings. This could be both literal and figurative, of course. The song’s title refers to a person talking themselves down from a self-defeating head trip. It’s a song about frustration. About how you can hurt your brain from living inside of it too much.

The guitar later gets higher pitched and fuzzier as it lays over top of the song and makes for a perfect compliment to the song’s meaning. The singer is angrily reminding themselves to settle down and stop taking everything so seriously. Stop being so shy and“you’ll never find yourself…all alone…” It’s the last line before the music fades into brief, echoing feedback.

“Settle Down” is a great single which creates anticipation to hear the rest of the album, especially considering the statement the band has released about it: “The songs cover a variety of issues: school/public mass shootings, anxiety, drinking, love, pain, passion, cheating…I think we managed to create individual, genuine stories in each song.”

So they’re not too interested in easy listening apparently. And that's good.

Listen to the song "Settle Down" by clicking HERE.

December 26, 2019
We can assume the title of Weather McNabb’s new ep comes from her own personal experiences of having to survive on a dead end office job--that blackmail of modern survival. (“Your soul’s on sale from 9-5,” she sings on the song “Adapt.”) Minneapolis-born but out of Boston, Weather’s earlier music career was kept funded by a series of bookkeeping jobs. As a result, her songwriting is of a woman disillusioned and pissed at the boredom and disappointment that life has given her, just the kind of lyrics you might expect to see squeezed onto a minimized Word document so her boss won’t see.
“Good morning” starts off with the bluesy reverb of a lone guitar before joined by electronic beats and McNabb’s smoky voice, which makes such a banal greeting somehow haunted. “One morning I woke up to find the sky was gray, steeped in lies,” she sings, the song then altering tempo and mood 3 times, even switching featured instruments.
Weather does this often in her songs, mostly with piano change-ups th…
Post a Comment
Read more