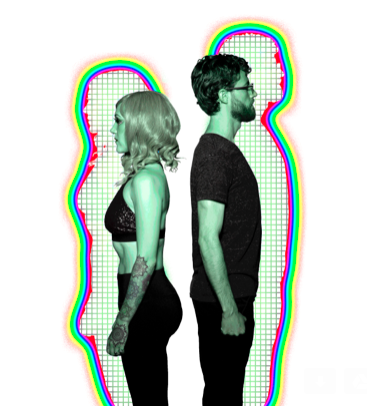 To release an EP of covers is daring enough on its own, but to do so covering only one band and that band being the music snob, hipster-worshipping Radiohead is an even larger task. Personally, I was a Radiohead fan since the early guitar-heavier days of Pablo Honey. The manner in which OK Computer wiped out the boundaries between rock and electronica made that album a revolutionary masterpiece. However, by the time In Rainbows was released, they lost me. Or I lost them. To me, it seemed the experimentation in Radiohead’s music became too arty and showy. What happened to simply writing a good song? In other words, for me, Radiohead became pretentious.

Fortunately, the 3 tracks chosen here by Mikkel Cloud are from before things got overblown.

Their first interpretation is of “How to Disappear Completely” from Kid A. The original is a slow, dreamy acoustic tune punctuated by a sorrowful string section. (According to Songfacts, many of the lyrics came from a conversation Yorke had with R.E.M.’s Michael Stipe in which Stipe advised Yorke to cope with all of his pressure by pulling his shutters down and telling himself, "I'm not here, this is not happening.") From Mikkel’s delicate opening vocals and Cloud’s even softer piano work, it’s apparent that they have no interest in offering photocopies. The only recognizable similarity between this song and its original is the lyrics. Mikkel lends a feminine aesthetic to the song that it never knew it had. It’s truly gorgeous, especially in the way the duo builds the song from quiet anguish to powerful testimony.

“Pyramid Song” is a track from Amnesiac, released only a few weeks after Kid A (Radiohead having perfected the art of the “surprise release”), a song in which York’s voice and piano playing eventually become immersed in strings and electronic noise. Mikkel Cloud’s version is murkier, more subtle, even including a synth piano adjusted to sound broken while Mikkel's voice gets downsampled though a bitcrusher. This is in the song's intro along with York’s vocalizing (which is, in itself, an instrument) as backdrop. Again, Mikkel’s voice lends an emotive gentleness, which counterpoints York’s trembling vibrato.

The last track, “True Love Waits,” is Radiohead number played on tour as far back as The Bends, but whose arrangement was never satisfactory enough to find an album. It remained their most well-known unreleased song until it finally found itself as the last track on A Moon Shaped Pool. It is also the last track here. The song is four-note piano figure with polyrhythmic loops. Cloud keeps the four notes but adds a thunder roll beneath the chorus. This added with Mikkel tenderly singing the lines “Just don’t leave / Don’t leave…,” and you have an interpretation which makes the hairs on your neck and arms stand straight up. I’ve listened to it five times in a row.

Of all people, Gene Simmons said in NME: “It's difficult for other bands to do Radiohead songs, because of the strength of their identity. Their identity is key to the song, specifically Thom Yorke's voice.” Previously I would’ve agreed, but now I completely beg to differ.

To hear an extended sampler of this release, please click HERE.