INDEPENDENT ALBUM RELEASE: The J. & F. Band, “From the Roots to the Sky” 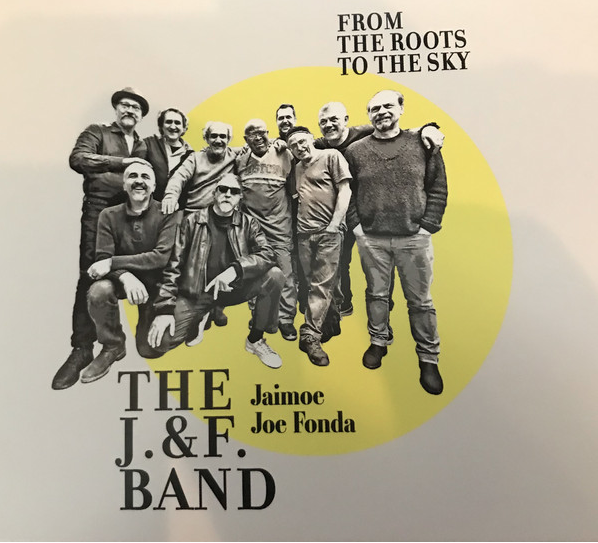 The new album, “From the Roots to the Sky,” is a collaboration between Rock and Roll Hall of Famer and Allman Brothers drummer Jaimoe with his good friend and bassist legend Joe Fonda. The result is the sort of freestyle jam-band music that one would expect if you’ve ever seen The Allman Brothers Band in concert where “songs” last anywhere from 7 to 24 minutes. For those attending these shows who might expect to hear what they listened to on the album, this could make for a confusing and maybe even disappointing experience. However, if you know what to expect and are willing to accept the improvisational nature of what makes your particular show unique, it can be a soul-moving, mind-altering experience. (I have a group of friends who religiously attend every Allman Brothers’ show at The Beacon Theater in Manhattan, an annual tradition at a venue they’ve played more than 200 times.)

For fans of the Allman Brothers, this release definitely belongs in their collection as it captures the same spirit of improvisation, though with a far jazzier, Miles Davis-y theme. “Melissa” or “Midnight Rider” this is most certainly not.

The first track “GS#2” begins with a bass solo by Fonda, more than demonstrating his mastery of the instrument. The rest of the band fills in around the bassline, joined by slow, smoky horns, more Blue Note than Beacon, for sure. The song travels on for 12 minutes, going places unexpected but not unknown. It sounds like what I imagine it is: a group of seasoned musicians gathered in a studio and letting the music wander where it may.

“Spirits of the Great Plains” also begins with another Fonda bassline that the other instruments build on. It starts out more subdued, less discordant, until finally building into a combination of feverish drumming by Jaimoe (enhanced in places by percussionist Tiziano Tononiand) with frantic guitar playing from Raoul Björkenheim. “West Buffalino” is another slow jam that increases intensity with the added help of special guest Daniele Cavallanti on tenor sax.

“Dixie Chicken/Mischief,” apart from having a terrific title, possesses the album’s first appearance of vocals, provided by Fonda with Björkenheim backing him up. “I’ll be your Dixie Chicken,” they sing, “if you’ll be my Tennessee lamb. And we will go a walkin’ way down in Dixie Land…” The song includes other lyrics that I also can’t imagine were fussed over very much, but just came organically, same as the music. At least I hope so.

“Gone Too Soon” is perhaps the most accessible track, since it only clocks in at right under 8 minutes. It includes Bruce P. Reese on “ghost guitar.” I admit that I had to look up what this was but couldn’t much. The closest I came was to discover that a “ghost note” is a musical note with rhythm but no pitch. On stringed instruments, this is played by muting a string until it sounds somewhat percussive. Not sure if this was what the playing credit is meant to indicate, but it’s interesting to know anyway. Have to love music that educates.

“Roz See You on the Moon” is certainly the noisiest track on the album, and therefor the riskiest, which could explain the far-out title they’ve given it. It’s nowhere near what you would call “easy listening,” though the harmonica playing by Fabio Treves towards the end is a pleasant payoff. It ends better than it begins.

Speaking of titles, the album ends with “J.F. Duet & Quartet” and “Super Jam,” which makes me think they ran out of energy for titles anymore. Doesn’t matter because these tracks are the most fun and energetic, especially “Super Jam,” in which Fonda’s bass playing is best highlighted. It also runs for nearly half an hour and, like the album itself, as well as what the name of the album indicates, it ventures absolutely everywhere.