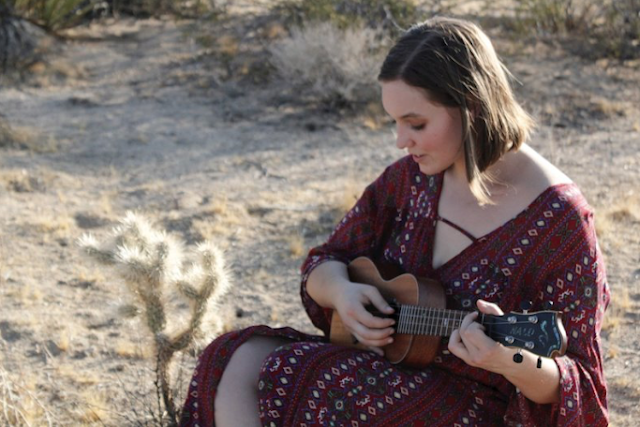 They (whoever they are) say that everyone should live in New York for at least one year to toughen you up and live at least one year in Los Angeles to mellow you out. But I’ve never seen LA as a mellow place. California either. It’s a beautiful landscape, sure. Paradise really. But there’s a darkness behind the gloss, fuel for a million movies and songs, so there’s no need to get elaborative (except I do have to mention that there’s no spookier neighborhood in the country than downtown LA.)

Heather Gruber is an Indie Folk Pop singer/songwriter and also an LA-resident. She comes from East Tennessee of all places, even once touring as a child with her grandparents in a southern gospel trio.


"This album tells the story of my leap of faith to start a life in Los Angeles,” she says. “It's my story. It covers the highs and lows, the beauty and the struggle, and wraps it up into a pretty little bow."

“Dance into the Desert” is more complex than that though, I think. Her melodies are simple, hum-friendly, and happy. “I don’t mind falling behind if I’m picking up daisies,” she sings on “Beauty Outside the Lines.” It’s adorable and deep. So are the next three tracks, especially “Ready or Not,” an optimistic song about impulsiveness “It wasn’t intentional to give my heart away, but what can I say? I didn’t have a choice,” she sings, sounding relieved about not caring, something which probably took a lot of pain.

By the time I get to the somber breakup song “How Do You Feel About Now?” I realize that I’m beginning to hear LA in these songs, whereas other times I don’t hear LA at all. Whether Gruber’s joyously expressing gratitude for a day gone completely right (“Perfect Day.”), or suffering the time-to-time defeat from living the artist’s life (“Dancing on the Edge.”), her tune is always upbeat.  A good dose of chin-up girl therapy, which could only come from a Southern songwriter. And yet stands in stark contrast to the grimy dragon of LA.

The standout track “Stepped Outside” is, I feel, about feeling stuck but having to remind yourself that things take time because each life event is a step towards something better. “I’m a little bit lost and confused. I’m a little bit stuck, figuring out what to do,” she sings. You just have to step out of yourself sometimes. It’s true.

There’s such confidence in her songwriting, singing, and playing, it’s a little surprising to hear Gruber sounding so delicate when speaks about herself. "I love people,” she says. “I'm a very fragile little human who has a hard time with life and I want people to know that they're not alone when they feel like fragile little humans who are having a hard time with life. I want potential fans to know that I'm their biggest fan."

I hope Gruber moves to New York. I think she would be happier here.

Listen to "Stepped Outside" Here.