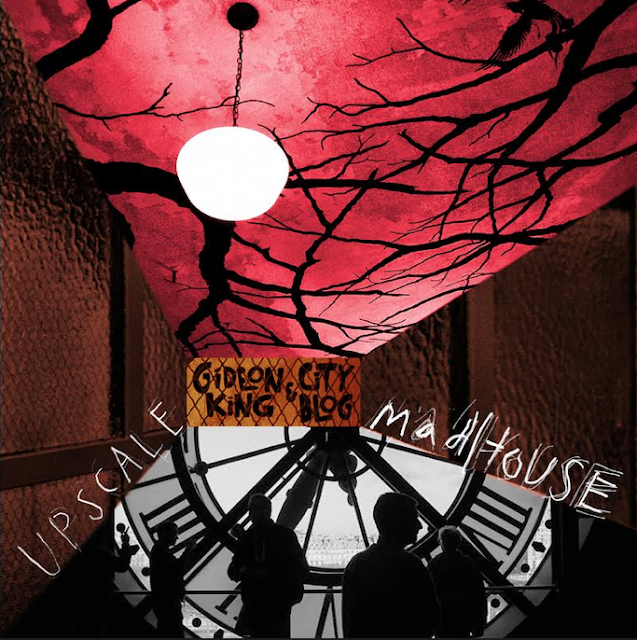 I’ll always be a writer, but music is the highest art without question. The cinema of the soul. Nothing I write will ever have the power and magic of a kickass arrangement of melodies and beats. Critically-acclaimed Gideon King & City Blog (GKCB) has released a new CD called “Upscale Madhouse,” already a nice play on words. Huffington Post calls King a "musical genius," but for me it’s King’s lyrics that impress just as much, in some cases bringing even more to the song than the jazz fusion behind it.

The album starts with “Straight to Hell,” a number cozy enough to live inside any Steely Dan playlist. But King’s lyrics here, though sweetly sung by Sonny Step, are biting: “Going straight to hell with a suitcase full of lies, guilty as charged, you know I’m just an average guy, spinning rainbow-colored lies. Going straight to hell, you know I’ll write you when I’m there. I’ll text you everyday, I’ll change my name to Mister Care. Because I care. I care!”He repeats this as the song builds and the words become, “I don’t care!” The self-contradiction is very New York.

I happen to share with King a deep love for New York actually, that violent dance of big city existence. “All the madness,” he mentions in the “making of” video (included below), “the irony, the vanity, the desperation, the intelligence, the art galleries, The Shake Shack, Central Park, everything. I’ll always write about New York. How could you not write about New York, man?”

King chooses a different vocalist for nearly every song, which gives the album a concept feel, as if each song were a different New York character. Location specific references are always fun, too. "Loveyouloveyouloveyou” has someone on the 5 train on their way to the Yankee game. “God I’m so alone” mentions stumbling into Duane Reade. On “Fake It On Facebook” King writes a spot-on critique of the social site, how it allows us to make our lives “real in someone else’s eyes.” The musical arrangements in each song are flawlessly mixed, so that, though the music is mellow, nothing gets buried.

An excellent guitarist, King worked extensively in the New York Jazz scene, playing with John Scofield, and members of Steely Dan. While some might say that “Upscale Madhouse” skates fairly close to being elevator music, for me the musicianship and lyrics help levitate the songs above labels. Though King’s music is mostly light and smooth, it’s never boring. Because really--how could anything about New York ever be boring?