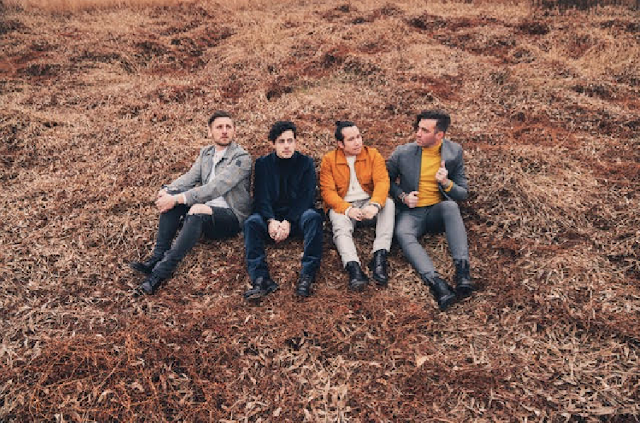 The Brooklyn alt-pop band American Authors first made their presence known with their first triple-platinum hit song “Best Day of My Life,” which made it to #11 on the Billboard Hot 100. The track appeared in film, television, video games, and sporting events. It was literally everywhere. Their 2014 album debut, Oh, What A Life, went gold. Two years later, their sophomore effort, What We Live For, featured the song “Go Big or Go Home,” another Top 20 hit. They’ve played every music festival from Lollapalooza to Reading to Leeds.

Now it’s time for the band to write the rest of their story (Get it?)

American Authors consists of four members: Zac Barnett [vocals], James Adam Shelley [guitar, banjo], Dave Rublin [bass], and Matt Sanchez [drums.] To record their third and newest album, entitled “Seasons,” the band holed up in a Tennessee mountainside studio surrounded by wilderness. “It was so inspiring,” said Sanchez. “We put our emotions and visions through this distillation process as the weather changed right before our eyes.” Hence, their choice for an album title.

The album starts with “Stay Around,” a heavy, stomp-beat tune with rapid rhyme vocals, bordering on hip-hop. “Say Amen” is a slower, hand-clap-infused tune with a chorus sounding at home in any radically modernized church.

“Calm Me Down” is more piano, more groove. Again, the singing and lyrics come dangerously close to rap: “That day in New York I spun out, I fell short, but I felt close to you / One night in Detroit I thought there was no point, but I felt close to you / Everyone telling me what to do, what to think, where to be…” It’s a song about that person we all know who always seems to have the right words to say to make us chill when things go haywire.

“I Wanna Go Out” is a track that I can’t help feel was inspired by the cabin fever that must’ve set in from being so isolated in their isolated studio. “Let’s get wild and make a memory,” Barnett sings, his voice higher and higher. “I wanna go out / Out of my mind…”

“Neighborhood” is a somber, coming-of-age acoustic number about leaving behind what’s familiar to find yourself. “Can’t Stop Me Now” is an upbeat anthem, predictably about defiance, despite“hanging on by a thread / hanging over my head…”

“Deep Water” is a meditative piano, hand-clap combo in contrast to the next track “Bring It On Home,” another travel song about the joy of returning as a new person from a long trip. “Before I Go” has us setting off again in search of answers. “I hope I find a piece of mind in all of my wo-wo-wo-woes / I hope the pain it brings a light to my broken so-wo-wo-wo-oul…”

Seasons closes out with the strong but short “A Real Place,” the album’s best track. Here Barnett’s voice sounds its most wounded and soulful. “Turns out I was lost / I was busy with a lover / God knows I never loved her at all / I need somewhere to fall…” Another song that I feel was inspired by the band’s surroundings while they recorded.  It’s also the song which best captures the overall theme of the album. (Perhaps should’ve been the album’s title?)

Seasons is an impressive effort for such a young band, though I could’ve done with at least one “rock out with our cock out” number to shake things up. Show off that youth and vigor, instead of so much seriousness. For the most part, this is an album largely concerned with the healthiness for the soul that travel brings to it. There’s a motif of places inside the heart and outside the mind, places journeyed to and journeyed from. Of starting out somewhere, setting off, then returning home, scarred but wiser. Maybe that’s why American Authors sound so much older than they are.